Stately shade trees add a sense of permanence and tenacity to the landscape, and can provide a ceiling for other plantings. U of M varieties have been selected and tested though many seasons to assure healthy trees with attractive features.

The little-known Summertime™ amur maackia is a small, tough tree that glows with silvery spring foliage and unusual creamy white flowers in July and August. 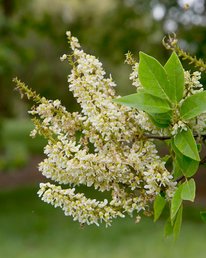 The 'Autumn Splendor' buckeye is popular for its stunning maroon fall color, and its tolerance of de-icing salts makes it a good boulevard tree. It has showy flowers in late spring and shinny nut-like buckeyes in fall.

Corktrees got their name from the deeply furrowed and soft corky bark. The fast-growing 'His Majesty' develops an open, spreading crown with coarse branches and dark green foliage. This male selection produces no seeds or fruit and is therefore not spread by birds. 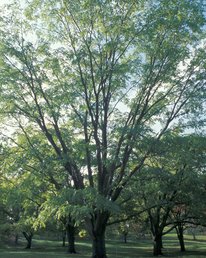 Skylark™ Hornbeam was part of former U of M breeder Harold Pellett’s effort to breed a more cold-hardy fastigiate hornbeam. A cross between Carpinus × ‘Shelby’, Skylark™ has undergone extensive trials at the the Morton Arboretum where they have a successful, long-term hornbeam breeding and selection program. Pest free, its remarkable adaptive character is enhanced by hybrid vigor and strong mycorrhizal roots that allow it to thrive even in droughty conditions.

The ‘Stately Manor’ Kentucky coffeetree is a male selection, with no pods, that offers interesting gray bark and yellow fall color. A good shade tree with a narrow, upright form and large leaves, it could be a suitable replacement for ash in Minnesota.

True North™, which was first discovered in 1972, is a male specimen notable for its narrow, upright-oval form and superior branch architecture. Like all coffeetrees, this selection is relatively tolerant of cold, heat, and drought and is adaptable to a range of soil conditions. 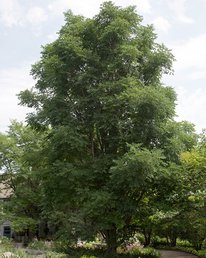 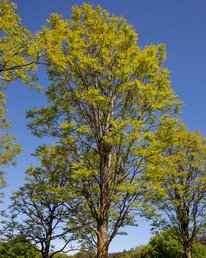 Brilliant early fall color distinguishes the Firefall™ Freeman maple. It is the result of a cross between ‘Beebe,’ a cut-leaf silver maple, and an earlier University red maple introduction, ‘Autumn Spire.’ This male selection produces no messy seed. Field trials began in 1992, with young trees evaluated for form, cold tolerance, and quality and timing of autumn leaf color. The initial selections were propagated by softwood cuttings in 1994 and sent to cooperators in Iowa, Oregon, Manitoba, and outstate Minnesota before introduction in 2005. 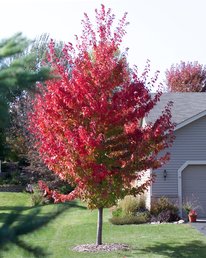 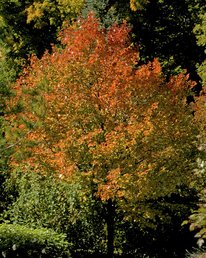 Summertime™, True North™ and Firefall™ are trademarks of the University of Minnesota.