It is not a fast process. Strawberries undergo years of scrutiny and propagation tests before being released. After a year in the greenhouse, the most disease-resistant seedlings are tested at the nation’s coldest agricultural research center, the North Central Research and Outreach Center at Grand Rapids, and at the Horticultural Research Center at Victoria. In the second summer, the fruit is evaluated: some may be small, tasteless, or too acid or tannic tasting. The best berries are notable for their creamy, juicy texture and flavor. Plants that don’t survive the winter or show signs of disease or mold are eliminated. Only a small percentage is good enough to save, and the best plants are set out in rows and monitored for two more years.

In the final stage, test plots are added at the West Central Research and Outreach Center at Morris. The harvests are evaluated— berries are measured and the yield is weighed—for two more years. If the variety is a winner, it is sent to nurseries where it will be propagated for two more years. After years of trials, the new cultivars are proven hardy, high quality, and disease resistant. 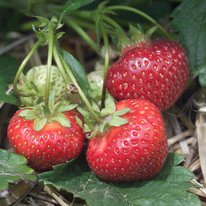 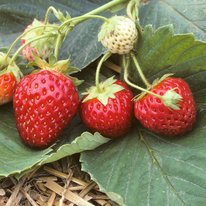 Itasca™, Mesabi™, and Winona™ strawberries were released jointly with the USDA-ARS.

Itasca™, Mesabi™, and Winona™ are trademarks of the University of Minnesota.

+
All University of Minnesota strawberry varieties

The University of Minnesota fruit breeding program has released 16 strawberry varieties since the research began. Some of the varieties listed below are no longer common or commercially available.